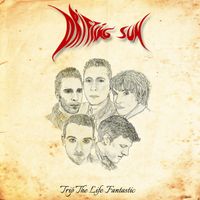 From the recording Trip the Life Fantastic

Mixed and Mastered by Dan Storey
Artwork by Ronnie Ho

The birth of a nation
The Odysseus star
It came like a thunder through the midst of time
Pierced through the scarred
Those who saw him rise
Were soon to fall
Those who saw him rise
He came to clear the land of those
who prayed upon the weak
He came to free the sons of evil fathers
who would dare to speak his name
He came to sow the seeds of hope
across the bloody land
All this and more, the power in the wizard’s mighty hand

People came to witness every blow
The shock of fire and lightning rain down hard
And rude Father Constance, fell to his knees
A deathly pale, the wizard took his final breath away

Hidden away, a shack of despair and solitude
No one saw the torture in his selfish nemesis
Have you seen the wizard?
Have you seen his majesty?