'FORSAKEN INNOCENCE' OUT END OF OCTOBER

The record is available as a download and as a Digipak CD with a 12-page booklet, and will be available soon as a limited edition double vinyl with a beautifully-designed gatefold sleeve.

Featuring a trio of fine vocalists (Marc Atkinson from Riversea/Moon Halo, Colin Mold previously from Karnataka, and Joshua Corum from Head With Wings, the new album also features amazing guest performances from Ben Bell (Gandalf's Fist/Patchwork Cacophony/Broken Parachute, and many others!), Eric Bouillette (The Room/Nine Skies, and also many many others!), Conrad Cheng and Sarah Skinner (Red Dirt Skinners).

You can now listen to the full album in our Music section - we hope you'll have as much fun discovering the record as we've had putting this beast together! 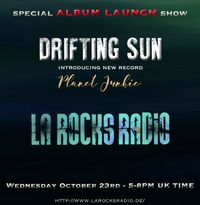 Join Paul Anthony Bedford and his listeners on his show on LA ROCKS RADIO for a special feature show to present Drifting Sun's new album Planet Junkie... don't miss it! 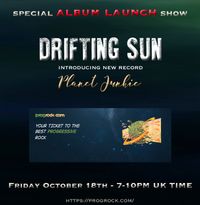 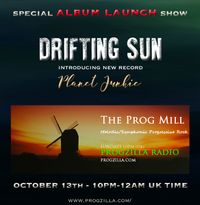 Join Shaun Geraghty on his great Progmill show on Progzilla Radio where he will be presenting Drifting Sun's new album Planet Junkie. lots of great music to be played, and there will be a competition too, so why would you want to miss it? Unless you are barking mad, that is!

Buy album
View on Bandcamp
Shipping out on or around September 20th
Read more…
0:00/???

Drifting Sun are a UK-based Progressive Rock studio project. Their music has been described as dramatic, theatrical, and atmospheric, in the true style of Progressive Rock giants such as Dream Theater, Queensryche, Genesis and Jethro Tull, to name but a few of the bands that influenced their sound.